UN experts call on all EDF’s key stakeholders to uphold their human rights obligations in the development of a wind-farm in Unión Hidalgo, Mexico

11 Dec UN experts call on all EDF’s key stakeholders to uphold their human rights obligations in the development of a wind-farm in Unión Hidalgo, Mexico

– For the first time, Four UN Special Procedures have sent joint requests to the states of Mexico, France and EDF.

– Special Rapporteurs acknowledged that if allegations are accurate, EDF would be complicit in human rights violations associated with the acts of its subsidiary company, Eólica de Oaxaca S.A.P.I de C.V, which have specially affected local indigenous women and girls.

– Having four UN Special Rapporteurs come together for this joint allegation letter is thus a strong indication of the importance and urgency of the Unión Hidalgo case.

Since 2015, the indegenous community of Unión Hidalgo claims that it has not been effectively included in the decision-making process about the business project to set up a wind farm on community land by French state owned company Électricité de France (EDF). Moreover, in the context of demands for respect for their human rights, the community’s human rights defenders are stigmatized, threatened and even physically attacked.

The community of Unión Hidalgo supported by Mexican NGO ProDESC initiated proceedings before local authorities and the OECD National Contact Point in France. However, efforts to install the park continued, and attacks on defenders were exacerbated.  For this reason, the indigenous representatives, ProDESC and ECCHR sent a formal letter to EDF, demanding that the company redouble its efforts to carry out human rights due diligence. As the energy company did not comply, ProDESC, ECCHR and representatives of the community filed a lawsuit in the Paris civil court in October 2020.

In addition, there is a growing concern over the human rights impact of the large-scale wind energy farms on the Zapotec indigenous people of Unión Hidalgo, in Oaxaca, Mexico, which have been implemented without considering the impacts on women. 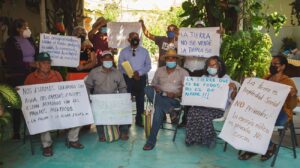 Therefore, for the first time, Four UN Special Procedures have sent joint requests to the states of Mexico, France and EDF, one of the largest transnational energy enterprises in France, requesting additional information regarding the course of the development of the Gunaa Sicarú wind park.

Special Rapporteurs acknowledged that if allegations are accurate, EDF would be complicit in human rights violations associated with the acts of its subsidiary company, Eólica de Oaxaca S.A.P.I de C.V, which have specially affected local indigenous women and girls.

The Special Rapporteurs call on the corporation to provide information on the steps taken to implement and adopt a human rights and gender impact assessment on the wind farm project, measures taken for genuine consultation with the affected communities to ensure the  free, prior and informed consent of indigenous women and girls, the identification of human rights risks and effective remedies, the establishment of mitigation and prevention measures, as well as steps taken to ensure that women have access to and use and control of land, enjoy the benefits of the energy project, and employment opportunities where large-scale energy project is intended to be developed. 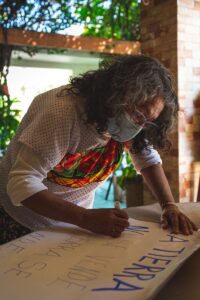 This is because companies, including EDF, usually try to restrict their obligation towards indigenous people to “genuine consultation with stakeholders”, whereas the challenge is to ensure they respect FPIC with all its guarantees. Plus EDF needs to promote a genuine consultation with the affected communities to ensure the  free, prior and informed consent of indigenous women and girls, the identification of human rights risks and effective remedies, the establishment of mitigation and prevention measures, as well as steps taken to ensure that women have access to and use and control of land, enjoy the benefits of the energy project, and employment opportunities where large-scale energy project is intended to be developed.

The letters reinforce that corporate actors should be held responsible for its business-related human rights abuses in line with the standards set on the UN Guiding Principles on Business and Human Rights and underpin that parent companies have an obligation to respect human rights in their foreign operations and should be held liable for the actions of their subsidiaries operating in foreign jurisdictions, especially in developing countries, which often do not have the resources or institutional capacities to enforce human rights standards.

“The UN special procedures communication sent to the Mexican government, the French government and EDF makes clear the urgent need for rigorous implementation of the precautionary principle of due diligence. It is no coincidence that it is the rapporteurs on extreme poverty, the right to development, indigenous rights and the situation of human rights defenders who are underlining the need for corporate accountability of corporations and specifically the obligations of EDF to provide information on the measures taken for the protection of the community of Unión Hidalgo”.

“The allegation letter sent by the United Nations special procedures to both Mexico and France as well as to the Électricité de France (EDF) is a major step towards ensuring accountability for the violations of women’s rights in the transition to renewable energy”.

Having four UN Special Rapporteurs come together for this joint allegation letter is thus a strong indication of the importance and urgency of the Unión Hidalgo case. While it pushes France, Mexico and EDF to respect their human rights obligations and pay attention to the situation in Unión Hidalgo, it highlights that this case is gaining international attention and concern in key international human rights mechanisms, as it remains unsolved in its respect and protection of human rights and its attention to its disproportionate impacts on women and girls. Communications of the Special Procedures are also annually reported to the UN Human Rights Council, thus raising public awareness, and putting pressure on Mexico and France to take a public position on the case. Given that the case against EDF is currently at the French court, under the Duty of Vigilance Act, these letters support the lawsuit submitted by community members to demand EDF it respect, protect, and fulfil the human rights of the Zapotec peoples and adopt measures to mitigate the adverse effects of the construction of the Gunaa Sicarú wind park on indigenous women and girls.

You may download the three letters addressed to the governments of Mexico, France and EDF here. You may also consult the official website of the UN Office of the High Commissioner on Human Rights (OCHR) where these letters were published.

What is the specific development EDF is working on?

Since 2015, EDF has been planning to build a large-scale wind park in the Zapoteca community through its subsidiary. The negotiations and administrative processes to obtain necessary permits were conducted without any good-faith consultations with the community. It is only after several amparo writs that the community members were even able to receive information on the energy project. Nevertheless, the project continued without any further in-depth consultations. In 2018, a federal court ruled on the violation of the community’s right to free, prior, and informed consent, ordering the reinstatement of the consultation process. The authorities have so far failed to fully comply, also based on the COVID-19 outbreak which has led to the suspension of the consultation process after the end of the informative phase. Moreover, attacks, intimidation, and harassment of those opposing the wind farm are common, women human rights defenders within the community explained that these attacks have sparked fear for them and their families. To gain the support of the indigenous community, it is alleged that the company tried to influence members to vote in favour of the wind park, thus dividing the Zapoteca community.

The development of the wind farm in the context of the energy transition in Mexico has had multiple human rights impacts for the local population, but has most disproportionately affected indigenous women and girls. For instance, severe diversity issues in the consultation process, with only 5% of participants being women, and choosing meeting times that do not work for women with care duties, made it impossible for women’s perspective to be heard within the consultation process. Women are more heavily affected by violence in their communities, which has hindered them from actively participating in the consultation out of fear of being attacked. Moreover, since women rarely hold land tenure rights, women are disproportionately impacted by the lease or sell of land, as they do not receive direct benefits from these transactions. Such a transaction often also impedes on women’s livelihood as they are precluded from accessing natural resources which are key for their care responsibilities.

Who are the UN Special Rapporteurs?

UN Special Rapporteurs are part of the Special Procedures of the UN Human Rights Bodies and are independent human rights experts with mandates to report and advise on human rights from a thematic or country-specific perspective. The system of Special Procedures is a central element of the United Nations human rights machinery. Their importance derives from their ability to raise international awareness of allegedly significant violations and advocate on behalf of victims. They also give States and other key stakeholders an opportunity to set the record straight and justify their actions, while generating a record of abuses alleged against States over time and providing an incentive for governments to act to rectify any violations. Special Procedures further enable the mandate holder to offer an interpretation of the applicable law. The mandates envisage a process of communicating with governments about alleged human rights violations either through allegation letters, in which they seek an official response from a government about an alleged human rights violation, or through urgent action letters, which allege imminent harm unless a government acts immediately. The letters of allegation on the Unión Hidalgo case are particularly relevant as they are amongst the few that not only call on the States, but also on the corporate non-state actors engaged in the allegations of human rights violations.

Who are GI-ESCR and ProDESC and why are they involved?

GI-ESCR and ProDESC are highly concerned about energy transition processes which do not consider gender equality and human rights principles. The rights of people must be at the forefront of the green transition at all stages to ensure it is sustainable and just for everyone. The right to participation within plays a crucial role in doing so. Only then can we ensure that marginalized communities, including women, are taken into consideration in the process.

ProDESC is a feminist Mexican NGO that focusses on economic, social and cultural rights. ProDESC defends and accompanies collective processes in three main areas: the right to land, territory and natural assets; labour rights; and the right to defend human rights.

They have been key in supporting the Zapotec people in seeking justice in the Union Hidalgo case.

GI-ESCR, with its focus on green transitions and expertise in gender just energy transitions have been actively supporting this case and providing assistance in the identification of the differentiated gender impacts and guiding the engagement with UN Special Rapporteurs.

For further comments or information, please contact Eduardo Villarreal at ProDESC and Alejandra Lozano at GI-ESCR.

For more information on the case, please consider the following resources: